En lille forhistorie -- How it all began 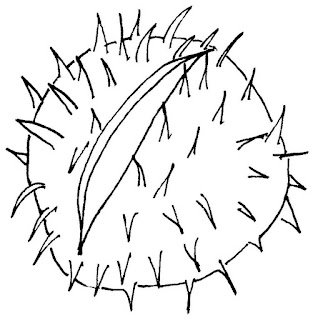 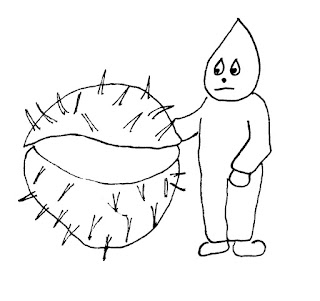 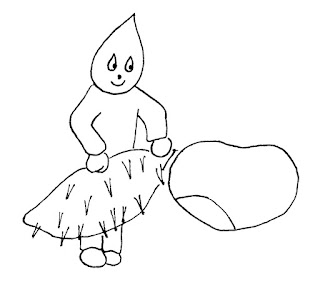 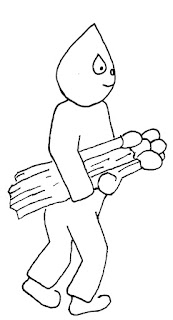 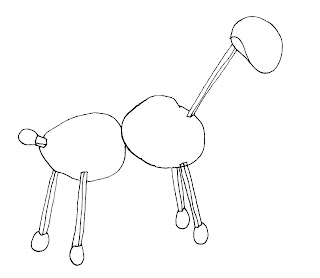 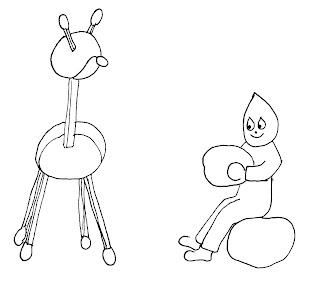 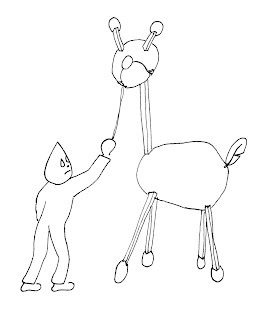 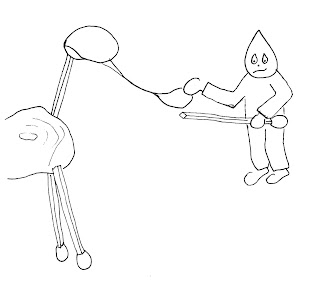 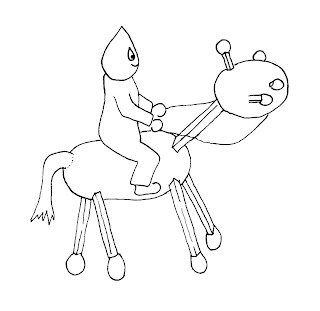 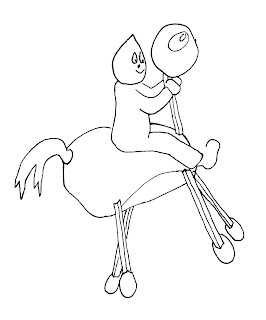 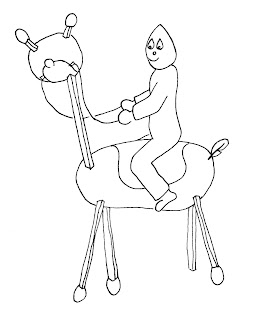 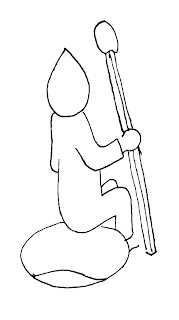 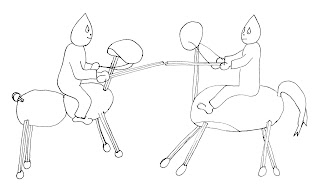 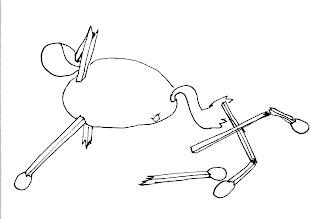 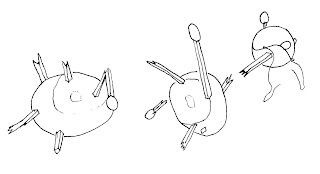 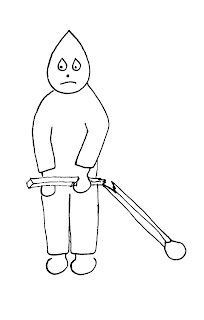 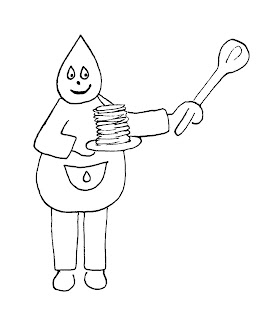 Vinter i Dråbeland -- Droplets in Wintertime

Every autumn the Droplet made new houses out of apples from the tree in the back of the garden. One autumn Yellow found a nice, big apple on a spot where the sun shone every morning, also in the winter. Every morning Yellow looked out of the window and enjoyed the warm sunshine.

A sunny winter's day, Yellow wanted to leave the apple house, but the door did not open. Yellow looked out of the window. Icicles barred the door, they hung from the roof, and reached down to the ground. Yellow was locked inside an icicle prison.
Yellow called out for the other Droplets: "Help me! I can't get out!"


Blue chopped away, and icicle splinters flew in all directions. Red who stayed and looked had to dodge.
"I have an idea," Green said. "Let's save all the icicles for summer. Then we can make ice cream and cool off."

Green and Red gathered all the icicles as Blue chopped them off. Purple came and asked what was happening.Red answered that Blue was freeing Yellow from her icicle prison, and that he and Green were saving the icicles for summer.
"Cool," Purple said. "Let me help."
They build an apple house for the icicles. The house had no windows, and the walls were very thick.
Green took a lot of the smallest pieces and went home. He did not tell what he was going to do.
A bit later Yellow was able to open her door.

Yellow came out smiling, and all the rest of the icicles were quickly put away in the ice house. The Droplets were hot and tired from the hard work.
Then Green arriwed. He had used all the littel bits and pieces to make ice cream.
All the Droplets sat in the sun outside Yellows house and ate the delicious ice cream.
"You know what, Green," Blue said with a satisfied smile. "This is good. You are going to make lots more this summer I hope."
Indsendt af Charlotte (MotherOwl) kl. 00.59 Ingen kommentarer:

A lovely spring day Purple looked up into the apple tree, and he saw a balloon up there. It's string was caught in the branches.

Purple called for the other Droplets, and then he climbed the tree.
Purple untangled the strin, but instead op the balloon slowly carrying Purple down from the tree it started drifting upwards!
He became afraid. And down under the apple tree all the other Droplets stood, calling Purple's name.

Luckily Purple was a quick one. He grasped hold of one of the topmost twigs. But he did not let go of the balloon. Now he was being stretched.
All the other Droplets climbed the apple tree until they could ract Purple, and then they slowly pulled him and the balloon down to the solid earth.
They tied the balloon to a sturdy looking tulip and went to bed.


The next morning, Purple had an idea. He would like a ride in the balloon to see how the garden and all the world looked from up there.
All the other Droplets found it to be a grand idea. Yellow and Purple found some strings whish they tied into a net over the balloon. Red had a big basket, which he brougth on a mini-skateboard.
Green asked if he should help carry the basket. "No thanks," Red answered. "This is much easier than carrying it."


The view form the balloon was really great. They soared over the Owls' house, smeeled the smoke from the chimney, and looked at the new, red roof.
"Oh look," Blue said. We can see the weather cock at the church on the hill, behind our apple tree."

As they soared and enjoyed the wiev a wasp came flying and landed on the balloon.
"Get away, ugly monster!" Green screamed, and slashed after the wasp with a loose rope. That was a stupid idea. He scared the wasp, and it stung the balloon with its stinger, making a little hole.
The air went out os the balloon with a long, loud sound, and the balloon with the Droplets slowly fell from the skies.

The Droplets were lucky. The balloon was once again caugth by the branches of the apple tree. The Droplets climbed down a rope and were home again.
Indsendt af Charlotte (MotherOwl) kl. 09.41 1 kommentar: